Posted at 04:14h in Uncategorized by Kathrin 0 Comments

You know those creatures who live on the green waves in Australia’s wild beaches? They all have golden curls, a Colgate smile, a six pack and perfect hands for each part of your body.😀

You’ve probably seen them around or at least heard some stories… Well I just met few of them and, truth be told, they don’t do anything but surf, eat, drink, repeat!

oh, and LIE. I heard some can love too, but I haven’t got into that yet.

Just got back from my spring break in Sydney and Surf Camp Australia. My first days in Australia put me on a surf board and even though it was huge, heavy and hard as fuck, I have never liked anything better (except making love). Just like Steve-O  did when he came down to have the authentic Australian surfers experience, I went to Surf Camp.

I have never been to a camp and I have never taken any lessons in my life. Always wished to learn the right way to play a sport or an instrument, but my parents cared more about my math and literature knowledge. And who can blame them? This is all what people these days talk about, right? haha

Australia’s surfers are young and restless. I could listen some of them forever. They can talk about WWT forever. And with an accent and a slang. M.M.MMM!!  And that is not world war three, but Wind, Waves and Tide. So, what is the first thing surfers do???

Omg, say perfect one more time and I will… Yeah! Surfers are liars. They say your rolling and jumping on the sand like a penguin is epic. They’ll give you enough confidence to go dip in crazy stupid waves and try standing on a surf board. It will take a couple of hours till you manage to have 5 amazing seconds up and they will just wave at you saying that was AMAZING! (I am rolling my eyes right now – amazing my ass!). Then they cheat and leave you there to catch some of their own. Now that is something I could never get tired of watching! But come back… come back! (I know you feel me here)

You tell them they are awesome and they’ll be like:

No, you are awesome! well that’s only half of lie. We could be awesome together, you know? Now this goes in a very cheesy direction… but if you really wanna hear a cheesy thing, I have decided to named my kid after one of the surfers I met this week. I am serious. He won a spot into my heart. And he only lied to me once. But he did it so well I actually believed him. This guy made me realise how silly and incorrect I look on the board and he pushed me so hard and couldn’t even look into his eyes after I gloriously crashed a moment later. Later on, when I made him smile a bit, I could picture how our kids would look like :))

Surfers are liars, I am telling you.

You tell them they are hot and they will be like:

Don’t go to Surfers Camp. They be walking all day naked and flashing their perfectly tanned bodies without even caring your heart might be sensitive. You’re gonna wake up at 7am and breakfast will be served by some Adonis who will open your mouth instantly. You’re gonna go to the beach together with dozens of people all over the world who probably have batter stories than yours and do some warming up that makes you subscribe to gym.

After one day all your muscles are sore as fuck and you start regretting all those hours on the couch watching Netflix instead of working out your ass. That’s it! I am gonna be the next squat queen! BS! If only I would have them every morning taking me to the beach and making me do the Christmas Birthday positions on the sand… ah! Imagine Chris Hemsworth doing it (with) to you. Cuz that’s how my instructor looked like! I called him Thor. Damn, that boy! I almost cried when he said goodbye. From all the teachers I had in my life, he’s the one I am gonna miss the most!😦

Surfers would smile, love and disappear in deep waters and do magic tricks on their boars. The other day I was riding my board when one of them caught me and while we were on the same wave he asked me to jump on his board.

What?! Are you flirting with me? Oh my lord, is he asking me OUT of my comfort zone?!

NO! YOU jump on my board! I screamed confident as fuck (like I am super busy and can’t be bothered to have more contact with the surfer of the week chosen by female campers)

2 seconds later he was on my board. But then he probably sensed my intentions and went back into the sea. I rode the wave till the beach and felt exactly after best the best one night stand. Well, probably more like Ariel when she got legs – shaking as hell J))

That was my highlight and my …first time. Ha! Not a surfing virgin anymore. Got one of them on my board! Pam pam! 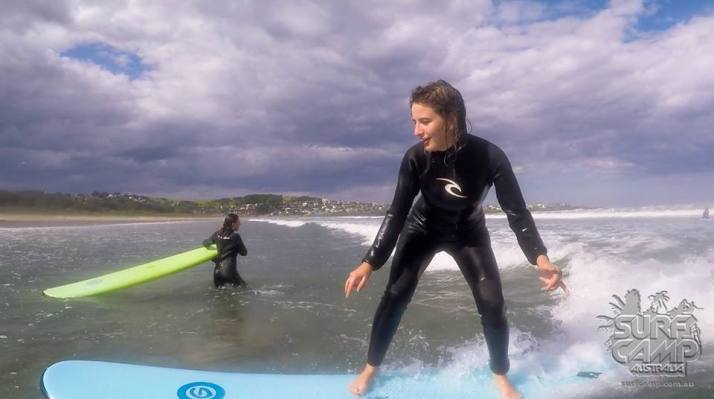 Surf Camp was absolutely the best thing I did in Australia! Waking up at 7 am every morning to see a team of professional surfers treating you like you’re the next team member can totally make you forget about the bed and whatever you did last night.

One day I will live somewhere on the beach where the wwt are peerrrrrrfeeect for surfing and all my neighbors would surf, eat sleep repeat. And my baby surfer boy would learn.😀

It’s sad when you get attached to people you might never see them again. I fell in love every single day and I will do it all over again. One day I will live somewhere on the beach where the wwt are peerrrrrrfeeect for surfing and all my neighbors would surf, eat sleep repeat. And my baby surfer boy would learn.

Now you know. Surfers are not only fit, talented and fun. They lie too. They’ll make you love them to the end of wave and back. Infinite times. They will tell you see you later, but if the waves call them, prepare to miss them! Ah, dem surfers!!!❤